The following sections describe how to get COSMOS installed on various operating systems.

Most websites now require TLS 1.2 for downloads. The version of powershell included by default with Windows 7 does not have support for TLS 1.2 which causes downloads to fail. Before running the COSMOS installer bat file, you must install Powershell 4 which is part of Windows Management Framework 4 which can be found here: Windows Management Framework 4 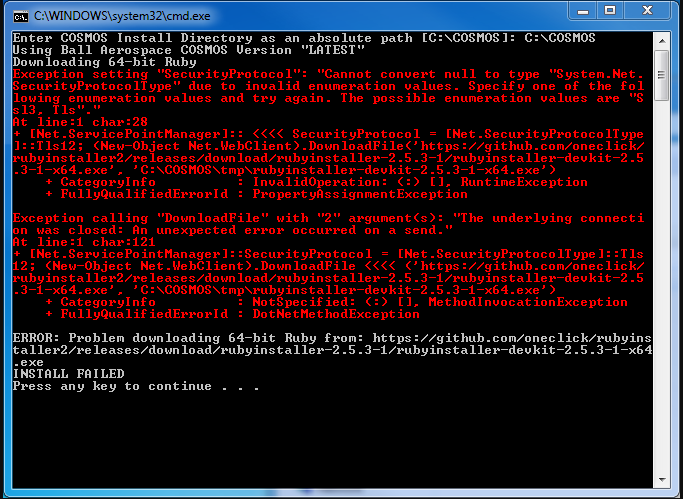 The COSMOS install scripts use command line tools like curl to download the code necessary for COSMOS across https connections. Increasingly organizations are using some sort of SSL decryptor device which can cause curl and other command line tools like git to have SSL certificate problems. If installation fails with messages that involve "certificate", "SSL", "self-signed", or "secure" this is the problem. IT typically sets up browsers to work correctly but not command line applications. Note that the file extension might not be .pem, it could be .pem, crt, .ca-bundle, .cer, .p7b, .p7s, or potentially something else.

The workaround is to get a proper local certificate file from your IT department that can be used by tools like curl (for example mine is at C:\Shared\Ball.pem). Doesn't matter just somewhere with no spaces.

Then set the following environment variables to that path (ie. C:\Shared\Ball.pem)

Here are some directions on environment variables in Windows: Windows Environment Variables
You will need to create new ones with the names above and set their value to the full path to the certificate file.

After these changes the installer should work. At Ball please contact cosmos@ballaerospace.com for assistance.

The COSMOS installation batch file downloads all the components of the COSMOS system from the Internet. If you want to create an offline installer simply zip up the resulting installation directory. Then manually create the COSMOS_DIR environment variable to point to the root directory where you unzip all the installation files. You might also want to add \<COSMOS\>\Vendor\Ruby\bin to your path to allow access to Ruby from your terminal.

If you left click the link above and try to save it, IE will corrupt the bat file. Don't download using Internet Explorer.

The following instructions work for an installation on CentOS Linux 6.5,s 6.6, or 7, and Ubuntu 14.04LTS from a clean install or any version of Mac OS X after and include Mavericks. Similar steps should work on other distributions/versions, particularly Redhat.

Run the following command in a terminal running the bash shell:

The install script will install all needed dependencies using the system package manager and install ruby using rbenv. If another path to installing COSMOS is desired please feel free to just use the INSTALL_COSMOS.sh file as a basis. As always, it is a good idea to review any remote shell script before executing it on your system.

If installing in an environment where SSL Certificates are not setup correctly. The following commands will let COSMOS install in an insecure fashion:

The install script will install all needed dependencies using homebrew and install ruby using rbenv. If another path to installing COSMOS is desired please feel free to just use the INSTALL_COSMOS.sh file as a basis. As always, it is a good idea to review any remote shell script before executing it on your system.

In the tools/mac folder is a Mac application version of each tool. Launcher.app can be copied into the overall Mac applications folder or the Desktop for easy launching. For this to work you need to set an environment variable for each user so that COSMOS can find it configuration files:

In your .bash_profile add this line (point to your actual COSMOS configuration folder):

You should have a working install and can now create a sample COSMOS directory structure where you can configure and run cosmos. To create a test area do this: