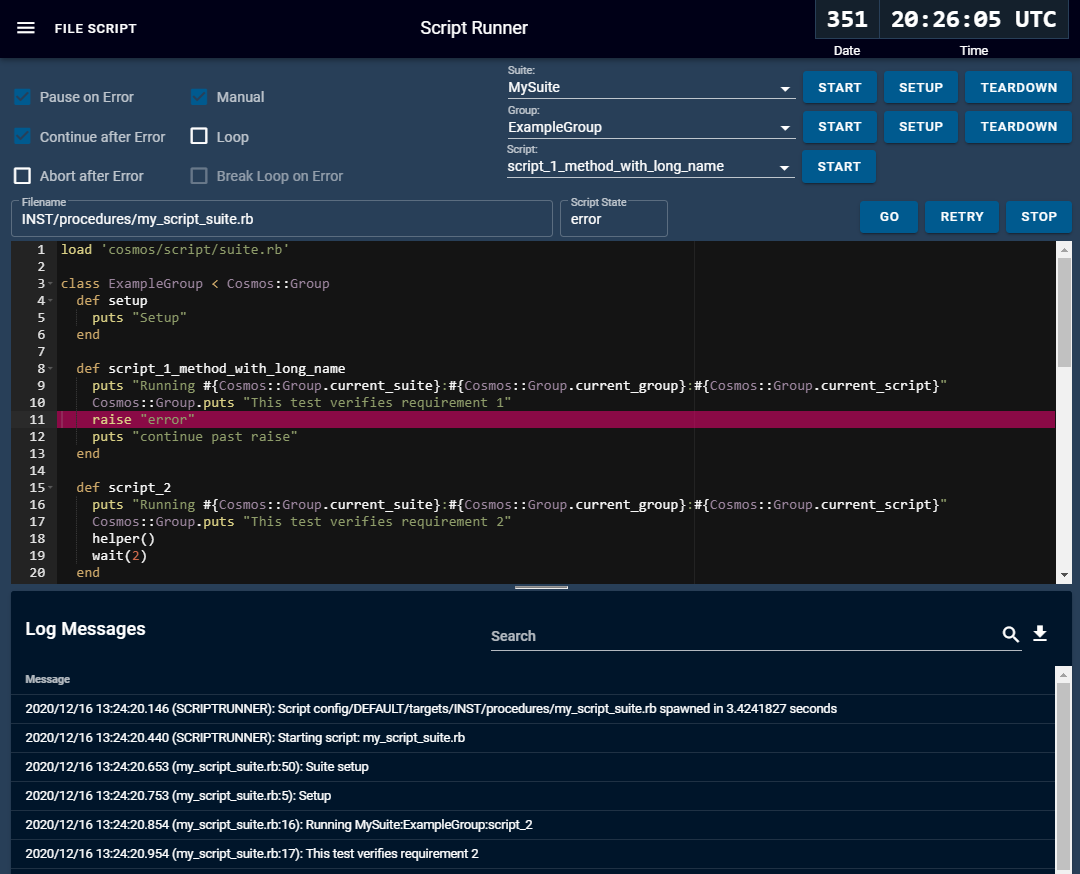 The Open and Save Dialogs deserve a little more explanation. When you select File Open the File Open Dialog appears. Initially it displays a tree view of the installed targets. You can manually open the folders and browse for the file you want. You can also use the search box at the top and start typing part of the filename to filter the results. 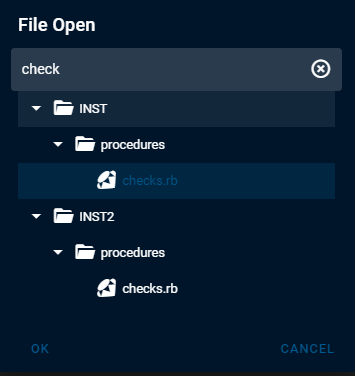 When saving a file for the first time, or using File Save As, the File Save As Dialog appears. It works similar to the File Open Dialog displaying the tree view of the installed targets. You must select a folder by clicking the folder name and then filling out the Filename field with a filename before clicking Ok. You will be prompted to before over-writing an existing file. 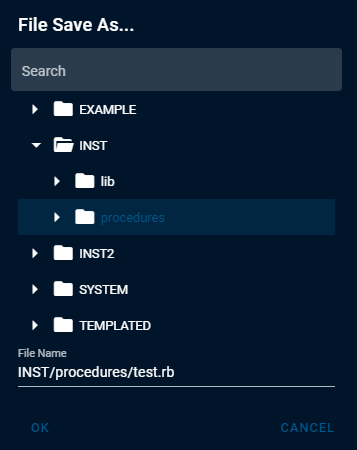 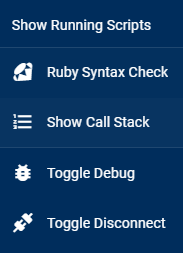 Running a regular script is simply a matter of opening it and clicking the Start button. By default when you open a script the Filename is updated and the editor loads the script. 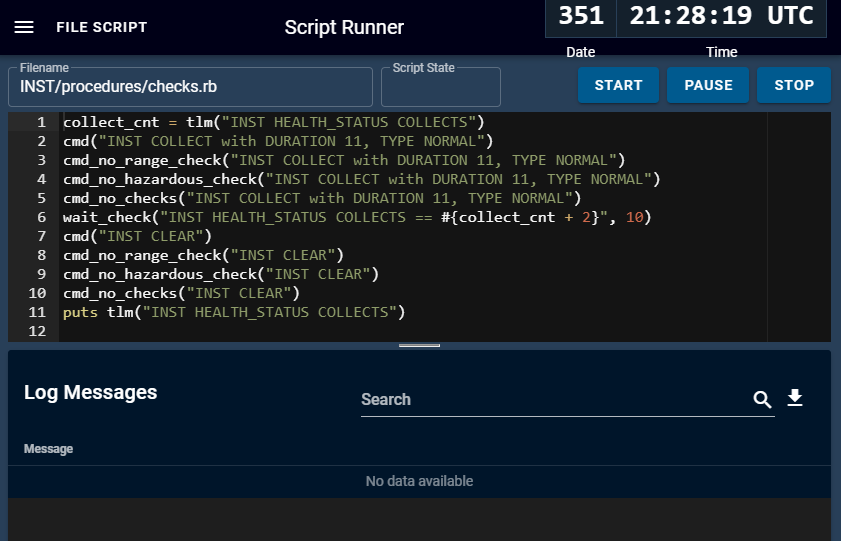 Once you click Start the script is spawned in the Server and the Script State becomes Connecting.

At that point the currently executing line is marked with green. If an error is encountered the line turns red and and the Pause button changes to Retry to allow the line to be re-tried.

This allows checks that depend on telemetry changing to potentially be retried as telemetry is being updated live in the background. You can also click Go to continue pass the error or Stop to end the script execution.

If a script has the word ‘suite’ in the filename it automatically prompts Script Runner to parse the file to populate the Suite, Group, and Script drop down menus. 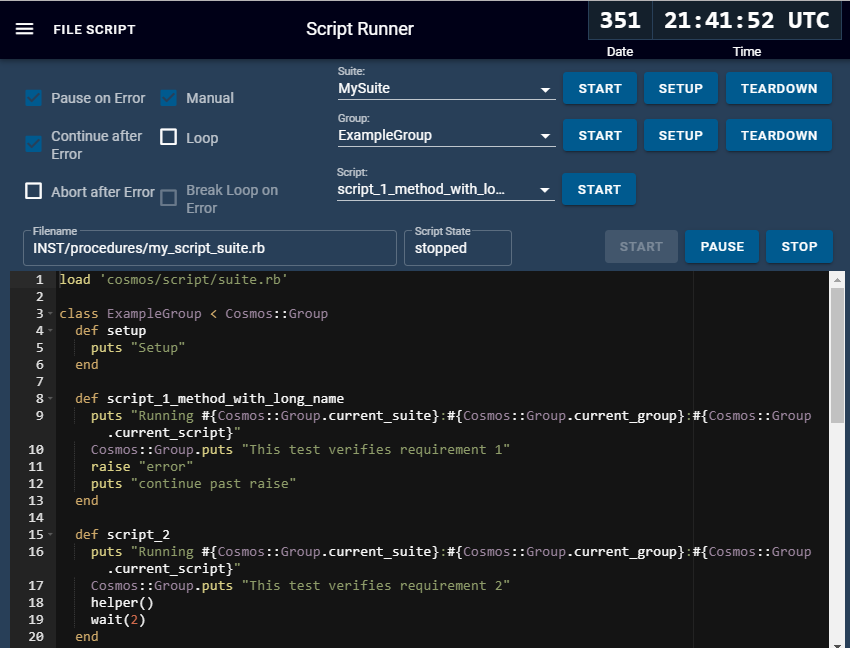 All suite files should start with the following line:

This pulls in the COSMOS suite framework including the Cosmos::Suite and Cosmos::Group classes. Any methods starting with ‘script’, ‘op’, or ‘test’ which are implemented inside a Cosmos::Group class are automatically included as scripts to run. For example, in the above image, you’ll notice the ‘script_1_method_with_long_name’ is in the Script drop down menu. Here’s another simple example:

The setup and teardown methods are special methods which enable the Setup and Teardown buttons next to the Group drop down menu. Clicking these buttons runs the associated method.

Groups are added to Suites by creating a class inheriting from Cosmos::Suite and then calling the add_group method. For example:

Again there are setup and teardown methods which enable the Setup and Teardown buttons next to the Suite drop down menu.

Pauses the script if an error is encountered. This is the default and identical to how normal scripts are executed. Unchecking this box allows the script to continue past errors without user intervention. Similar to the User clicking Go upon encountering an error.

Continue the script if an error is encountered. This is the default and identical to how normal scripts are executed. Unchecking this box means that the script will end after the first encountered error and execution will continue with any other scripts in the Suite/Group.

Abort the entire execution upon encountering an error. If the first Script in a Suite’s Group encounters an error the entire Suite will stop execution right there.

Loop whatever the user Started continuously. If the user clicks Start next to the Group then the entire Group will be looped. This is useful to catch and debug those tricky timing errors that only sometimes happen.

Break the loop if an Error occurs. Only available if the Loop option is set.